THE Avon Navigation Trust and the Canal & River Trust will have a new handle on water music when, with Bancroft Cruisers' help, they recreate the late Queen Mother's two boat trips to relaunch the Avon and the Stratford Canal as navigable waterways.
Members of The Orchestra of the Swan's wind and brass section will play aboard two floating pontoons at the July 4 event to mark the 50th anniversary of the restoration of the canal and the 40th year since the river was reopened from Evesham to Stratford-upon-Avon.
Avon Navigation Trust's (ANT) VIP guests will include representatives of the Royal Engineers and Birmingham's Winson Green Prison, who both sent many teams to  help with the original work.
There too will be Job Hutchings, whose father led the drive to save the canal, and Nicholas Barwell, whose pioneering dad is the Avon's local hero. They will unveil commemorative plaques.
Young Midlands industrialist Charles Douglas Barwell OBE was prompted to act when a 1948 family boat trip from Birmingham was unceremoniously halted by the choked up route.
He and an army of volunteers moved heaven, and a lot of earth and mud, to reclaim the river from Tewkesbury to Evesham. Tireless Birmingham architect David Hutchings MBE, who had already spearheaded the successful rescue of the canal, went on to clear the way through to Stratford.
"They were both pioneers," comments waterways charity ANT's Engineering Director Roger Clay, who has organised the event with the support of town groups, including The Stratford on Avon Canal Society.
"The river and the canal became the life blood of the area's leisure and tourism industry. We owe a lot to both men, and to all those who supported them."
Queen Elizabeth the Queen Mother travelled by narrowboat to officially open the canal in 1964, and to celebrate the river relaunch in 1974.
Some of the people who were there then will be among the guests, along with representatives of organisations who supported the restorations, including the National Trust, RSC, local authorities, The Stratford on Avon Canal Society, the Inland Waterways Association and the Canal & River Trust.
The Queen Mother's two journeys will be repeated to take the groups to the unveiling ceremony and concert at Bancroft Lock at approximately 3.30pm, before boarding Canal and River Tours' new full-size barge Jennifer May to hear the moving concert by the Orchestra of the Swan, pushed along the river by Eric the tug boat.
"We were keen to have a floating orchestra because David Hutchings had the whole of the Bournemouth Symphony Orchestra on a floating platform of barges in 1964," adds Roger.
The award winning Orchestra's Artistic Director David Curtis says performing on the river will be a first. "We've played on a train to London for Chiltern Railways, but never on water," says David.
He says the Orchestra was delighted to be asked to take part, not least because it's another opportunity to engage with the local community.
"We are keen to show everyone that we're not a stuffy bunch in penguin suits playing Mozart Symphonies. We do wear suits, and we do play Mozart, but this shows a different facet of what we do."
The ANT event, which will also include a specially composed poem by Canal Laureate Jo Bell, will be followed by the town's crowd-pulling July 5 and 6 River Festival, which is packed full of free events.

ONE of the very latest innovations from Midlands-based security solution giants Gunnebo UK Limited will be in the spotlight at next week's National Convenience Show at the NEC.

The UK-developed SafeCash Counter Deposit Smart (CDS), which is billed as "just what your cashiers and finance teams have been waiting for", is a very welcome entry level product for retailers making their first inroads into automated cash handling.

"Most retailers are comfortable with paying money into a device, but the automated and integrated market is still relatively embryonic in the UK.

"The CDS, which can also be linked to our web-based CashControl monitoring software, will be a winning first step," explains Andrew Willdig, Services Director for Gunnebo UK, which was granted a Royal Warrant last year.

The SafeCash CDS, which gets pride of place on the Gunnebo UK stand at the March 24-36 Show, is a super secure and intelligent cash handling solution that means money is untouched from customer to cash centre or bank.

Gunnebo UK, operating from its Wolverhampton head office, has been working with banks, retailers, cash In transit companies and public and commercial businesses for almost 200 years.

The company, which includes Chubbsafes, supplies its integrated solutions service to businesses large and small across the country, and specialises in developing innovative answers to customer challenges.

Other recent innovations include the trail-blazing eSecur, which gives customers unique smart control over their entrances and perimeters. 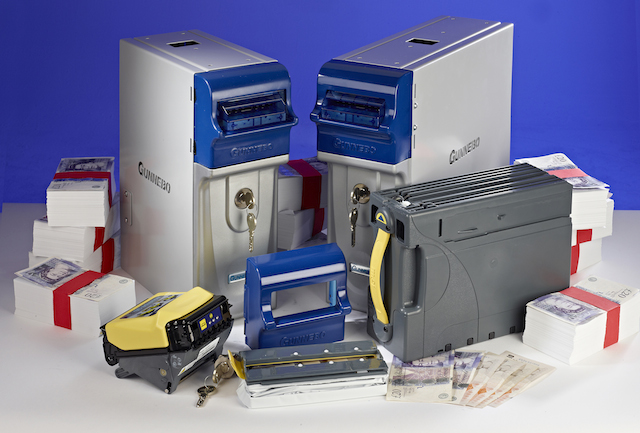 A POPULAR farm shop that is passionate about local produce is offering customers some home-grown food for thought too.

Hillers, of Dunnington, is hosting a special event for local author Lindsay Stanberry-Flynn, who will sign copies of her gripping new novel, The Piano Player's Son, there on December 19.

"Hillers is a wonderful place, and a lovely setting for a book signing. I'm really looking forward to it," says Lindsay, who will also be selling copies of her book at the event.

The Piano Player's Son, about a family torn apart by a devastating secret, is Evesham-based writer and creative writing teacher Lindsay's second novel. Her first, Unravelling, won three awards and her latest was specially selected for publication by Cinnamon Press.

Award winning Hillers - which also features a cafe, a plant centre, gift shop and bird hide set in a pretty display garden - has grown and sold its own produce for over 80 years and is an ardent support of local food and enterprise.

It is promoting tasty goodies alongside Lindsay's latest thrilling read as a perfect winter warmer Evening of Bliss.

The shop, which is renowned for its gift hampers, will also package up The Piano Player's Son with tasty treats as a blissful Christmas present.

Teaming up with a local author is a great match, says Sally Hiller, who added: "Locally sourced goodies, with delicious produce, drinks and a good book - what better way to spend a blissful evening in front of the fire?"

Lindsay will be selling and signing copies of The Piano Player's Son (price Ł8.99) on Thursday December 19, between 10am and 11.30am in the farm shop.

TURNOUT OFF THE SCALE FOR BOOK LAUNCH

LOCAL author Lindsay Stanberry-Flynn's launch of new novel The Piano Player's Son has been greeted with a glorious fanfare of approval.

People queued at the official launch event for signed copies of the enthralling book about a family torn apart when a death and a deadly secret strike a distinctively discordant note.

Worcester's St Swithuns Institute was packed with eager readers keen to hear Lindsay (pictured) read excerpts from her story and they also enjoyed music provided by local band Slowtrain, Trevor Stanberry-Flynn on the piano, and poetry from Amy Rainbow and Gary Longden.

The Piano Player's Son was picked for publication in a nationwide search by Cinnamon Press, whose founder Jan Fortune said: "It's a novel that hooks the reader from the opening line.

"In the best novels there is a sense not only of immense satisfaction, but also loss when we finish the book. The Piano Player's Son achieves this."

The novel is the second by Lindsay, who teaches creative writing in Evesham, where she lives, and Malvern and addresses groups round the Midlands and Cotswolds.

Her first book, Unravelling, and her short stories have also won awards, and she was recently a winner in the Fish Publishing flash fiction competition.

Lindsay is also turning her writing skills into a chorus of creative high spots, as writer in residence for the English Symphony Orchestra. Her flash fiction stories of the characters were flashed on to the orchestra's website in the build up to their series of productions of Benjamin Britten's Noyes Fludde.

"It has been a busy year so far, and it's not letting up as I'm in the middle of writing my third novel," says Lindsay.

"But it was wonderful to take time out to celebrate the publication of The Piano Player's Son, and I am delighted that so many people came to support me at the launch."

For everyone who purchases a copy of The Piano Player's Son, Cinnamon Press is also offering a free novel. For full details, visit www.cinnamonpress.com/the-piano-players-son/

The book is also available to buy from Amazon and all good bookshops, including Blandford Books of Broadway.

Words and music come together on the right note

AUTHOR Lindsay Stanberry-Flynn has hit just the right note to celebrate the publication of her gripping new novel The Piano Player's Son.